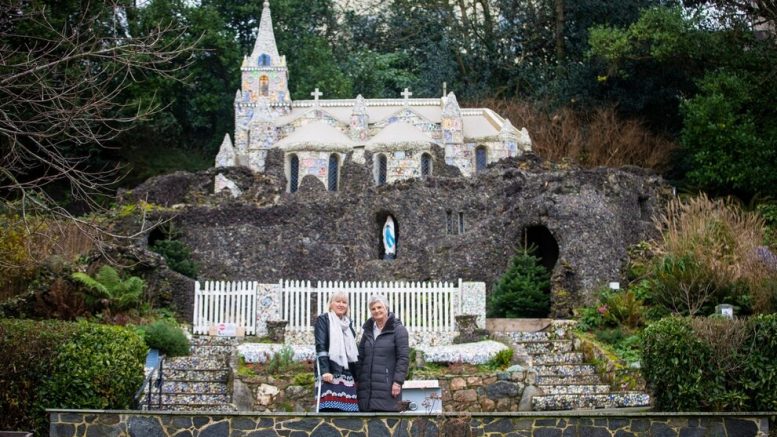 CREATING a visitor centre at the Little Chapel would overly commercialise the site, the Guernsey Guild of Accredited Guides has warned.

Guild chairwoman Gill Girard said they appreciated all the work that had been done, but felt the latest plans went too far.

‘Everyone is entirely appreciative of the restoration work,’ Mrs Girard said.

‘For this we cannot thank the LCF enough.’

But the guild and its guides are worried about the latest plans.

‘Many of the groups have, through their respective organisations/firms, donated large sums of money to help restore the chapel,’ she said.

‘But almost without exception, whilst the groups appreciate the work undertaken, the overriding groundswell was for a halt in further development.

‘While there is no doubt the Little Chapel Foundation have, through public donations and fundraising, restored the Little Chapel for future generations to enjoy, the essence of the building and surrounding area is in danger of becoming an over commercialised venture.’

Foundation fundraiser Jack Honeybill said the chapel was given to the people of Guernsey for £1. He denied the site was being over-commercialised.

‘The plans are not in any way intended to commercialise the site, but to make it more accessible to visitors,’ he said.

‘The first priority of the Little Chapel Foundation is to improve the current infrastructure leading up to and around the chapel so that it is more accessible, and the rest will follow like a jigsaw puzzle.

‘This is for both safety and accessibility reasons, and is supported by the Guernsey Disability Association.’

However the guild guides are still concerned that the work scheduled to be carried out will lead to more changes.

‘If these extensive plans are passed, the upkeep will increase, and to offset this an entrance charge will be inevitable,’ said one guide.

Mrs Henry said the unique charm of the Little Chapel cannot be underestimated.

‘We must ensure the chapel remains the beautiful little folly it was designed to be, free for all, accessible to all,’ she said.

Visitors were also keen to see the site’s ambience maintained.

Steve Hill, a visitor to the chapel from the Isle of Wight, said the site should be left alone.

‘It could do with more parking, but it’s good that it’s small and quiet,’ he said.

‘I come here in the off-season because it’s more tranquil.’

His partner Erin Lashmar said: ‘Nobody likes change, but there could be better facilities to help protect the site – although a visitor’s centre is too much.’

Half a million pounds has already been raised for the restoration project.

Now the restoration has been completed, it is projected that another £500,000 will be required to enable the construction work.

Included in the plans is an interpretation centre, entrance building and gateway, toilet block and wheelchair access. Footpaths, railings, benches and new signage will also be installed, as well as more lighting and cameras.

There are concerns that the proposed gate might lead to the foundation introducing admission fees, but this has previously been denied as being part of the next phase by the foundation.

David Gorvel takes visitors to the attraction by taxi.

‘The place belongs to everyone in Guernsey,’ he said.

‘The chapel is our heritage, it’s iconic to Guernsey. I doubt Deodat would have wanted a visitors centre. The Catholic Dean should know about this.’

Mr Gorvel said that taxi drivers are invested in the chapel and were frustrated that they had not been consulted.

He added: ‘There should be complete transparency in where the donations are going.’

The plans are currently being considered by the planners and the public until Thursday to give feedback. They can be viewed at Sir Charles Frossard House and the St Andrew’s constable’s office.