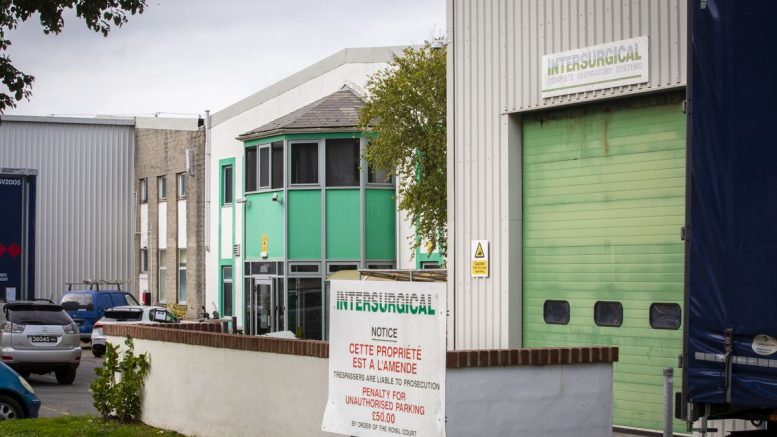 The intersurgical factory sold for £4.65m to builders’ merchants

The shock closure of the medical equipment supplier in October, after operating locally for nearly 40 years, saw some 90 islanders left jobless.

Most left immediately but a small team of employees stayed on as a closure team at the company’s branch at Circuit House, Pitronnerie Road, to pack up and ship the machinery and facilities off-island.

The Guernsey Press understands this week was the final week of employment for this team.

‘While it has been a sad and difficult period overseeing the closure of a business that has operated in Guernsey for almost 40 years, we are very pleased about the opportunity this presents for Guernsey Building Supplies and look forward to seeing the building being repurposed for their needs going forward,’ said James Birch, director of Intersurgical Guernsey.

‘In a market of such restricted supply, assets such as Circuit House are exceptionally hard to come by.

‘The interest we received demonstrates tangible demand for sizeable units such as this,’ said Joanna Watts, managing director of Watts Property Consultants.

‘This opportunity creates real potential for the growth of a local business and we are delighted to have worked with Intersurgical and Guernsey Building Supplies to take the building to its next phase.’

The 40,740 sq. ft of warehousing property was purchased for £4.65m. and Guernsey Building Supplies plans to refurbish the building to provide a much larger offering than its current centre in Guelles Lane.

James Sherborne, co-chairman of UK-based Sydenhams Group, which owns Guernsey Building Supplies, said he was delighted to acquire Circuit House and to continue developing the business in line with the company’s other successful branches across the south of England.

Be the first to comment on "Intersurgical factory sold for £4.65m to builders’ merchants"